A map is useful to the players for the same reason and can lead the story in new and interesting directions as geography may suggest a new solution to a problem. Imagine trying to defend a village - the enemy is marching from the east. We could defend the walls, however studying the map shows there are only so many routes one can march a body of troops. If they are not carrying all their supplies, instead living from the land a little that removes more options. If we collapse trees in these areas, we'll be pretty sure they will march through this pass in which there is another village which owes us a favour. How about we head there, take over the inn and fill the soldiers' ale with something poisonous? This kind of thinking can only happen if the players have enough information about the world to plan ahead but it can lead to the story taking a life of its own; one of the most interesting and rewarding parts of being a GM.

I'm not alone in my love of maps. Tolkien was a fan of letting a map provide a framework to his story as were C.S. Lewis and many others. Fortunately, I also enjoy drawing them. I've always sketched in pen or pencil and I find the act of drawing an area a good way to think about what might happen within it. Over the last few years I have been looking for a comfortable way to draw maps electronically so I can save, undo and print multiple copies easily. It is the reason I originally bought an iPad, and why recently I've been interested in the Pencil by FiftyThree. The Pencil is a lovely piece of kit, with a great feel and the closest I've come so far to using a pen and a sketchbook. I'm going to be using it to draw the maps I need for my Legend of the Five Rings game and I'm hoping that as I learn the tool I will get some good results.

In the meantime, behold the first map. 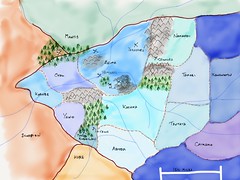 If you know your Rokugan geography it's in that big empty area in the north west Crane lands, east of Zakyo Toshi. The details are particular to my own campaign world although the scale matches at least some of the Rokugan maps I've seen.

I've used the original version of this map to calculate travel times, which has been important for helping the party arrive at Winter Court before the snow made travel impossible, and has helped me map out plausible troop and supply movements so enemies and allies do not suddenly have access to unexplained resources. Many of these things will probably not be noticed, but they help make the world seem credible and solid and they also help me keep track of who is doing what and why, which is important when it comes to improvisation.
Posted by Tom at 19:16