Improving gaming in the living room

Aside from books, dice and paper, there aren't many things needed to run a game. However, I've played in a variety of different places over the years and some thought on the surroundings can really improve the game. Music, for instance, is a great source of tension and emotion and is something I want to dig into in more detail in the future. There are plenty of things that can be done with aesthetics (darken the room, candles, etc) if you have that interest and there are a whole range of options for props depending (mostly) on how much you want to spend.

For instance, this is an actual magic item in an actual game. 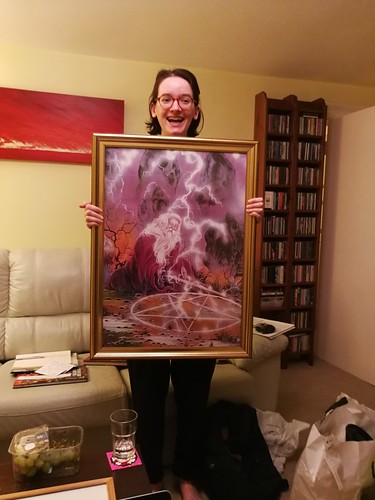 For now, I want to focus on battle maps and some of the utility around running encounters.

Firstly, I don't use miniatures in my games. They look lovely, but as a recovering Warhammer player I know how much space they take up and how much time one can spend painting them and building scenery. They also make use of grids, which moves the game towards tactical combat. Fine, if that's what you want (I've run and played in many successful tactical games) however everyone has to be bought into that style of game. These days I'm more enjoying free-form gaming with roughly drawn maps and more space for interpretation in the rules. I also don't use a battle mat, instead drawing on a whiteboard.

In the past I've been able to GM in a university lecture room. This has some great advantages over a living room - plenty of table space and chairs and, most importantly, whiteboards on the wall. Taking the whiteboard off the table frees up space for notes, sheets, dice rolling and snacks. Secondly, it makes it easier for everyone to see it without having to lean over the table. In my living room, where we play on a coffee table and someone is usually sitting on the floor or a beanbag, that is very valuable.

After much thinking, I've decided I need a vertical arrangement in my living room. I can't fix a whiteboard to the wall in a useful way, so I'm going to pick up an easel and put a big whiteboard on it. I've got a handful of magnetic counters which I can use to keep everything in place and I can draw the static elements with dry-erase markers. Players can use laser pointers to indicate movement and I've got an idea for some kind of electronic hitpoint counter for the big bad using lights along the edge, but that is something for another time.

This will also let me improve how I do initiative. At the moment I use Matt Mercer's technique of asking for initiative in a sorted way (25 to 20 ... 15 to 20 ... etc) but inevitably something gets missed so I have to rearrange on the board. My new plan is to use magnetic counters so I can slide them around easily without rewriting.

This is written on the back of having to move gaming into my flat and starting to think how it all fits in. It's not overly insightful, but most thoughts about gaming setup seem to revolve around huge tables, amazing miniatures and custom furniture - none of which are going to find a place in my life at the moment. Instead, this is about improving the experience for my group in the environment available to us.
Posted by Tom at 18:30 2 comments: